Gendering the Kurdish-Turkish conflict: a talk with Nadje Al-Ali 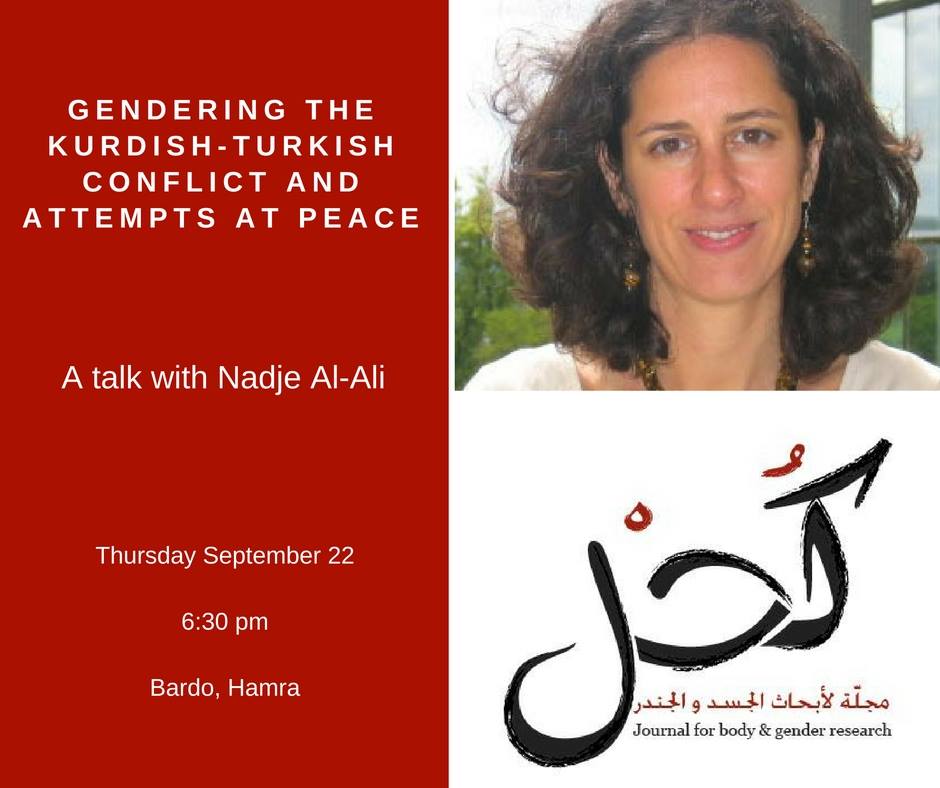 Nadje Al-Ali will explore the significance of gender for understanding conflict and achieving peace. More specifically, her research intends to shed light on the way that peace is articulated and put into practise by actors whose conceptualization of conflict extends beyond national, ethnic and political violence to gender-based violence and conflict. She will do so by looking at the specific empirical case of feminist activists working for peace in the context of the Turkish-Kurdish conflict. Through a historically grounded and in depth qualitative research amongst Turkish and Kurdish women activists working towards and for peace, she addresses the question of how nationalism, peace activism and gender-based activism intersect. The multi-sited qualitative joint research with Dr Latif Tas, a Turkish-Kurdish academic, took place between February 2015 and August 2016 in four different locations: Diyarbakir, Istanbul, London and Berlin.

The talk will be in English.

Speaker's bio:
Nadje Al-Ali is Professor of Gender Studies at the Centre for Gender Studies, SOAS, University of London. Her main research interests revolve around gender theory; feminist activism; women and gender in the Middle East; transnational migration and diaspora mobilization; war, conflict and reconstruction; art & cultural studies and food. Professor Al-Ali was President of the Association of Middle East Women’s Studies (AMEWS) from 2009-2011 and is a member of the Feminist Review Collective. Her publications include What kind of Liberation? Women and the Occupation of Iraq (2009, University of California Press, co-authored with Nicola Pratt); Women and War in the Middle East: Transnational Perspectives (Zed Books, 2009, co-edited with Nicola Pratt); Iraqi Women: Untold Stories from 1948 to the Present (2007, Zed Books) and Secularism, Gender and the State in the Middle East (Cambridge University Press 2000). Her most recent book (co-edited with Deborah al-Najjar) entitled We are Iraqis: Aesthetics & Politics in a Time of War (Syracuse University Press) won the 2014 Arab-American book prize for non-fiction. Currently, she is working on a research project about the Turkish-Kurdish conflict.